The Henry B. Jones House: We’re Not in Hillcrest Anymore

Thanks to the efforts of Scripps Health, the exterior of the Henry B. Jones house has been tastefully restored

The Henry B. Jones house, a historic structure in San Diego, CA, has disappeared from the suburb of Hillcrest!

This charming Craftsman style home was named after its first owner, a Wisconsin farmer who sold the farm to move to California, where he later became president of Hillcrest’s first bank. Mr. Jones commissioned construction of the home in 1911, between Fourth and Fifth Avenues in San Diego. I walked by this house almost every day on my way to the gym. It looked out of place in its original location, having been surrounded by newer commercial architecture, including Scripps Mercy Hospital.

Scripps Mercy Hospital treated its first patient in downtown San Diego in 1890. To accommodate expansion needs, the hospital was relocated to its current address on Fifth Avenue in 1924. Despite the hospital’s comparatively modern appearance, I was surprised to learn that it has been in its current location since close to the time when the Jones House was built.

Scripps Health, in collaboration with the local community, spent over eight years researching 100 sites to evaluate suitable alternatives for the Jones House. As luck would have it, a powerful cyclone struck the Hillcrest area, lifting the former farmer’s house into the air and dropping it into a nearby residential neighborhood. The house survived the whirlwind and landed intact!

But seriously, the house was finally lifted by a crew off its original foundation and placed onto the flatbed of an oversize load truck on July 1, 2018. In the middle of the night, the truck slowly navigated one mile west to a vacant lot at 4114 Ibis Street.

Ibis Street is located in the quaint San Diego neighborhood of Mission Hills. This neighborhood is known for streets named after birds, and Ibis Street is no exception. Mission Hills is an ideal landing spot for the Jones house, which will be in good company among other single-family homes dating from the 1910’s, 20’s and 30’s, according to SanGIS.org. The following is an image of the house, shortly after its relocation. 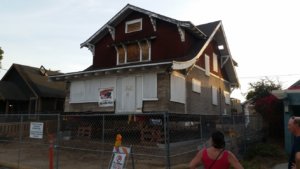 Thanks to the efforts of Scripps Health, the exterior of the Henry B. Jones house has been tastefully restored, and the house has been donated to the Catholic Diocese of San Diego, for the purpose of housing the priests of St. Vincent de Paul Church in Mission Hills.  I recently walked by the house on Ibis Street to take some pictures.  I was greeted by cheerful neighbors who wanted to dialogue about its future and how proud they are to live in a neighborhood which cares so much about historical preservation.

Now that the Jones house has been relocated to a more suitable residential neighborhood, Scripps Health can move forward with its hospital master plan of developing the now vacant lot at Scripps Mercy Hospital San Diego.